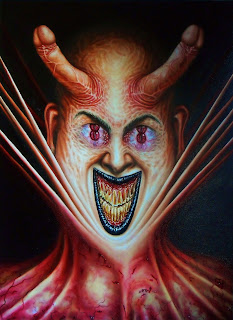 
The sex industry, in all it's malignant forms; Abuses and destroys it's victims, to such an extent, that they are no longer human beings.
They are merely fleshed robots, sexual fodder, whore holes, sexual receptacle's, un-dead slaves, who arrived at these God forsaken Hell holes, via multiple reasons and the inevitable consequences of life's tragedies and trauma's.

Many of these women (also males and children) are the victims of sex trafficking, which accounts for the most common form.
Many are lured via the promise of respectable jobs, having themselves or their families threatened. Their passports taken and told that they are in debt to their new owners. Or they are sold or abducted into trafficking, and are controlled by threats, violence and rape.
Then there are the victims of sexual, physical and mental abuse; the prerequisite to prostitution and pornography, who suffer from PTSD. In which there is a continuation of abuse, self loathing, self harm, and a re-inaction of the abuse itself.( Please see my recent post 'A letter to the man who destroyed my innocence'  This is an emotional perspective on PTSD.)
Combined with substance abuse, self worthlessness and de-humanisation and detachment. Which leads to the perpetuating cycle of numbing the pain and trauma of child abuse, with substance abuse and therefore prostituting their bodies in order to buy the substances. And, I stress the word bodies, because that is all they possess. Their minds have long been fragmented, along with their souls.
Prostitution has always been an oppression of women, as we know 'it's the oldest profession in the world',  enforced by people who viewed their sexual needs as a 'human right' in which Rape was justified and preceded by monetary gain via the sex trade.
Now, they have gone one step further, by procuring their victims by persuasive and/or threatening coercion and/or forceful measures, in order to obtain the bodies of women and children for no cost or very little. Which means massive profits for the pimps, controllers and pornographers.
There is also evidential correlation between pornography and prostitution and - rape, sexual violence, sex trafficking,sexually motivated homicide, child pornography, abuse and grooming of children...The list goes on.

No one with any decency, morals or virtues, would pimp and sexually exploit a human being.
That fall's to the sexist, misogynistic and monetary exploitive, sexual deviants, who enjoy the best of both worlds...of making massive profits, whilst enjoying their evil gratifications.

This is simply 'Supply and Demand' for without demand, there would not be this diabolical human suffering of immeasurable and disposable victims.

The statistics of the sex trade


My hope..is that the world adopts this legislation..to criminalise the clients instead of the prostitutes..and especially that of child prostitutes.


Posted by the violence of pornography at 15:04