My experiences of rape. 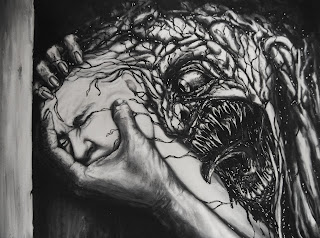 'Shut up and take it!'
From my album 'The things that people don't like to talk about'

To me personally; Rape is secondary to murder. I can say that, because I myself was a victim of numerous rapes. So I know exactly how it feels.
Both your mind and your soul are murdered. I would of rather have been physically beaten, than have had those men use their penises as internal weapons.
Those penile weapons penetrated and violated my very personal and private parts. Those parts of my body, meant for love,intimacy and the place where my children would grow and be born. And those rapists knew, that they would contaminate my mind for the remainder of my life. Their evil polluted my psyche, and that those most abhorrent and traumatic assaults could never be erased. That is the rapists power, their enjoyment. And their pleasure. Rapists don't rape in order to satisfy their libido. They rape in order to gain control and power. They get off on debasing, degrading,humiliating and hurting the victim.
There are heterosexual men in prison who rape other heterosexual men for those very reasons. They know that raping another human being is ultimate power and degradation. Violating a persons most intimate parts has a profound and everlasting psychological impact, far transcending that of physical abuse. There is also 'War rape' Of both males and females, frequently used as a means of psychological warfare in order to humiliate the enemy and to destroy the social fabric of society.

Rape is something that you never recover from psychologically. Not just the rape itself, but the repercussions, such as secondary victimisation.
You cannot talk openly about it ( or indeed report it) easily, as you can about other crimes against a person. Unlike being mugged or physically assaulted, where the person affected will gain sympathy.  You are stigmatised, condemned, isolated, abandoned. You are 'damaged goods'  You are 'soiled'.
And the shame of it;  is all over you~ and deep inside of you. Forever.

Most rapes are committed by the men who are known to women. It could be a husband, boyfriend, relative, friend, acquaintance or a new date. These type of rapes are rarely reported because they don't fit the victimology of a violent stranger rape and the woman is usually in a relationship and has frequent sex with the male. Or in the case of date rape, the woman may begin by engaging in sexual activity, but the male may become forceful against her consent and she won't report it, because she will blame herself and it will be a case of  'He said - She said'.

There are many reasons as to why men rape. One being 'Anger rape' when the male possesses an extreme hatred towards women and the aim is purely to humiliate, debase and hurt the victim.

Another, is 'power rape' where the male compensates feelings of inadequacy. Raping victims feeds their issues of mastery, control, strength, authority and capability; to assert their competency and validate their masculinity.
The power rapist fantasises about sexual conquests and believes that the victim initially resists them, and once they overpower their victim 'she will eventually enjoy it'. Or as in the case of pimps and traffickers, using rape to gain power and control over their commodity.

Lastly there is 'sadistic rape' in which there is such a sexual transformation of anger and power that the aggression itself is eroticised. The excitement is achieved by inflicting pain and maltreatment upon his victim, he finds immense gratification in the victims torment, anguish, distress, helplessness and suffering, exacerbated by pornographic rape; in where the female secretly desires to be raped, even by multiple men.

This leads me to the relationship between the sex industry and rape. The acceptance, normalcy and accessibility of the sex industry, reinforces the fantasy which increases sexual violence against women, (and also men and children)  who are perceived as mere sexual objects who can be used and abused by males.
Pornography is so dangerous because it eroticises the domination, humiliation and coercion of females. Pornographers film women being gang raped, sometimes by hundreds of males. She is portrayed as a wanton woman who is never satisfied by one man and is shown to smile, enjoy it and have multiple orgasms. Pornographers edit the pre-drug party, the crying, screaming, vomiting, trip to the emergency room with internal damage, std's and the possibility of infertility.

Studies have shown the link between sexual offenders and pornography that positively correlates to sexual assault by endorsing such fantasises. Some offenders believed and insisted that their victims not only enjoyed being raped but also enjoyed the violence.
Therefore pornography leads to a higher acceptance of rape, violence and other myths against women and general sexual callousness; this also applies to child molesters and child pornography.

I am going to extend the reasons of rape; to that of 'Entertainment rape'.
Since the mobile phone explosion, there is now the capacity to photograph, film and text sexual crimes all over the internet.
Females are viewed as sexual objects that can be abused,humiliated, degraded, mocked and used to amuse others as mere entertainment.


Male victims don't parade about in mini skirts and are to blame, because they are drunk! And neither do elderly women and children. Society, the media and the judiciary system only blame young women..Why? Because they provoked the rapist or asked for it??

The long term psychological suffering and trauma of the victim is immeasurable. My feelings are, that the judicial system needs educating. Not only in the understanding of sex offenders and the logistics of rape, but of the severe impact it has on the victims.
There needs to be a universally revised legislation regarding sentencing of sexual offenders.
The leniency and lack of consequences is both a mockery and a diabolical injustice to the victims, whom society fails on many levels; thus further empowering the perpetrators. Unfortunately, we still reside in a world of sexism,objectification, misogyny, patriarchy and apathy; which all facilitates the oppression of females.
And I think that one way to combat this, is to teach children about these contributing factors by external agencies within schools. That would be a crucial start to address these issues.


Posted by the violence of pornography at 04:34